Westwinter Lane is a new series created by Xandrea. The series follows the daily lives of Mell and Zeronica; including their pets Maurice and Philip.

The fanfic takes place in a smaller city inside a fictional county called Regard. Where everything seems to be after each other. Plotlines include undead aliens, being sucked into a PC game, bake sales, and so much more.

Kra'ang Unit #454 "Mell":a sociable Kra'ang drone who was abandoned by his own race. He's talkative and motherly towards his housemates and wife. But; he lashes out easily.

Zeronica: a serious fembot, she can easily pick a fight with others if attempted; She is the wife of Mell, but she cannot stand his kindess.

Hug-Me Psycho Unit #170 "Maurice": an electronic toy which was manufactured under the newer line of Tickle-Me Psychos, which was Hug-Me Psycho; a newer, smaller edition to the franchise. Mell actually finds him during a search for experiments. Mell had broke Maurice out of the factory and kept him to himself. Maurice was fine with his new home, despite all the things he gets towards his personality, like candy and PC games.

Philip: a normal-looking squirrel, until he was spiked with some of Mell's mutagen. By drinking some of the mutagen, Philip developed multi-purpose senses inside of his mouth, He remains a normal squirrel, but his insides were altered, causing him to spaz and for the rest to eat away his mind.

Mell joins in on a bake sale and hijinks ensue.

Maurice and Philip are sucked into a PC game for some reason.

Maurice and philip look after an injured kitten.

The characters visit the boardwalk and hijinks ensue.

Christmas comes along and hijinks ensue.

Regard becomes a peaceful, yet sane town for some reason.

Maurice and Philip wake up in an alternate universe.

(SEASON FINALE) Zeronica cheats on Mell with a king of a undead alien race and gives birth to the end of everything.

"Deathly Fuel" Maurice and Philip see a scary movie, but Philip has constant nightmares about the villian.

"Rosey Crown" A new face comes to Regard with a new fashion statement that hypnotizes the citizens.

"Philip S. Johnston" Philip is under the dangers of social networking.

"Burning In" A mysterious salesman sells a drug to Maurice. Zeronica has to find that salesman.

"Strawberry and Banana" Philip has two new imaginary friends that are actually his hallucinations.

"Beautiful Yet Fearful" Maurice and Philip fall asleep and are teleported into a monstrous field full of their fears. 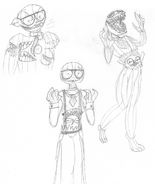 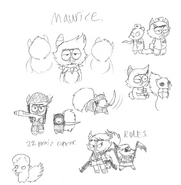 Maurice and Philip in their usual past time 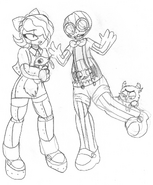 concept art for "Opposites"
Add a photo to this gallery
Retrieved from "https://theeverythingeverything.fandom.com/wiki/Westwinter_Lane?oldid=22004"
Community content is available under CC-BY-SA unless otherwise noted.