[It cuts to a dark mountain. ]

Charles, narrating]: So it was fortold…

[It shows a plane flying to Wikia Island, followed by a boat, and then a Bus driving on a road towards a ruined town].

[Charles, narrating]: That every 25 years…

[Charles looks at a picture of him and his friends]

[Charles, narrating]: Five would gather and confront the demon of the Island.

[It shows a women crying, following by a church exploding. ]

[Charles, narrating]: It has been 25 years since I was on this Island…

[It shows 13 Strangers together, standing outside The Butler and King Hotel and Resort]

[Charles, narrating]: And now…. These murders….. its all happened before.

[It shows an official city-looking building exploding, following by the TVs exploding. ]

[Charles, narrating]: I know the Killer.

[A shadow with horns moves away].

[Charles looks at the Mountain, grimly. ]

[It shows the guests introducing themselves. ]

[Speedy]:  Speedy, but I’m known to my readers by a different name.

[Suddenly, inside a jail, a bunch of doors open, including a complex one, and it cuts to a man in a special containment cell, his body stretched across a giant board, all tied up so he can’t reach any part of his body, surrounded by a huge 10ft. glass box surrounding him.]

[Person in Cell]: I’ve been watching you, Charles.  You are a very… very special butler. Aren’t you?

[Charles, in a different scene]: “You can only find help if you look at the ultimate crime. But know this, you're running out of time”

[It shows the guests running around the hotel as it cuts to Richard, Charles’s father, and Charles fighting].

[Richard]: I don’t want you investigating any of this…

[Charles, screaming]: WHY NOT?!

[Sub, Omni, and Charles run from something unknown as Speedy and Brandon glance at each other in a different scene. ]

THE REAL MYSTERY BEHIND WIKIA ISLAND

[It shows a moving circle map and a key before a temple is shown. ]

[A helicopter flies above the Island as it cuts to a red car out of control. As the car begins to swerve, another car shows up. The Drivers, not paying attention hit the red car, hitting it into the fence. The fence breaks as the car goes half-way over. The other car's driver gets out, but they look in absolute disbelief. ]

[Other Driver]: My Gosh…

AND NO ONE WILL BE SAFE

[It cuts to Charles on a plane. Suddenly, a missile hits the engine of the plane as it begins falling.]

[The Plane’s door explodes, as passengers are sucked outside, and into the turbine of the other engines. ]

[Charles, shouting]: HE IS COMING!

[As the plane prepares to hit the island, it shows a demonic looking figure slashing at the camera before going dark. ]

“ For this, ladies and gentlemen is a game… of Murder." 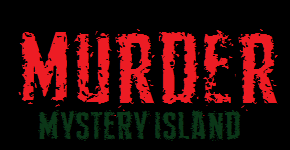 [A private jet flies towards Wikia Island. Its Passenger looks at the Island, noting the large and ominous mountain, and the seemingly never-ending jungle. The plane flies towards what appears to be a strip of land for the plane to land on. As the plane lands, the plane passenger takes a breath.]

[Charles]: "I had to start this game with an interesting note, so I decided to turn to Nature. “

[It shows a glass shattering, and a man falling to the ground]

[Unknown Figure]: Did you really think I wouldn’t return after all these years?

[It shows a helicopter flying towards the Mountain, as Charles appears with a torch in one hand, inside what appears to be a cave. ]

[Suddenly, inside a jail, a bunch of doors open, including a complex one, and it cuts to a man in a special containment cell, his body stretched across a giant board, all tied up so he can’t reach any part of his body, surrounded by a huge 10ft. glass box surrounding him.]

[Same Unknown Figure]: You are a very… very special butler. Aren’t you?

[It shows a mysterious figure in the air]

[Unknown Figure #2]: The Story you and the Thirteen have been fed is a lie.

[It shows the destruction of Wikia Manor, a car crash, police cars racing down the street, and a town erupting in flames] [Charles]: There is a new player in this game.

[It shows the shadows becoming in a more… demonic shape. ]

[Charles]: But I fear that it just not just the guests who are in danger this time...

[It shows the guests taking to each other. ]

[Speedy]: Speedy, but I’m known to my readers by a different name.

[It cuts to a scene with a red car out of control. As the car begins to swerve, another car shows up. The Drivers, not paying attention hit the red car, hitting it into the fence. The fence breaks as the car goes half-way over. The other car's driver gets out, but they look in disbelief. ] – 1:22

[The car begins heading forward and back, as the teenagers scream in terror. ]

[The car begins going closer towards the Cliffside. It cuts to a teenager who is on a motorcycle. He looks out at the blue ocean, smelling the sea salt. ]

[It cuts to Charles's Butler Quarters. The Maid and he are watching his on his bedroom's television. ]

[Person on the Screen]: I have come, from a place far away. I am here, amongst you all, for a reason. Five of you have hidden who you really are, or perhaps, don't realize it. I am here to collect you five for my ultimate purpose, which is part of a bigger plan. Time and Space itself have joined together for this moment. The Moment of a Cosmic Conjunction is nearly upon this very island.

[Charles]: This isn’t just a game of life and death anymore… it’s a battle of good and evil.

[It cuts to multiple helicopters flying above a prison. A man walks through a hole in the wall, as inmates begin rioting. It cuts to the shadows forming into the shape of a demon. ]

[Unknown Figure #1]: You have no idea what you are a part of Charles.

[Richard]: I don’t want you investigating any of this…

[Charles, screaming]: WHY NOT?!

[There’s an explosion in a government-like building, and another explosion at a more ruined building. Citizens in a town begin running away from explosions, as it cuts to Jack, Brandon, Omni, and Sub looking at the ruins of the town. ]

[Unknown Figure #1]: If you want to know the truth Charles, you need to ask Richard.

THE REAL MYSTERY BEHIND WIKIA ISLAND – 2:25

[It shows Richard looking around suspiciously, as it cuts to everyone racing inside the Hotel. It then cuts to a different scene. Omni walks over to Sub, grabs him by the shirt, and yanks him over towards the Kitchen doors. Omni then punches Sub through the doors, before throwing him towards the table. Sub falls the ground, groaning as Omni begins beating the crap out of him. Sub kicks Omni in the face, getting back up in a flip. The two attempt to throw punches at each other, each person failing. Omni manages to kick Sub in the chest, before punching him in the face. Sub manages another punch to Omni, before Omni forces Sub to stand in front of a stove and have his arms up at the top of a wall. ]

[Sub]: What the hell is wrong with you?

[An explosion rocks a building, as Charles and the Guests are flown backgrounds, a helicopter hits part of the Hotel, and an evil laughter is heard. ]

[Speaker]: Attention, we are getting ready to crash. Please hang on to your lives.

[Suddenly, the Plane takes a deep dive down, falling rapidly. The oxygen bags appear, as Charles gets up. He then hears a loud series of screams. Turning around, he looks to see Sci is in one of the back seats with a rope around his neck, while Bloxx exits out of the airplane's bathroom, burned up, and Dark goes into it, blood all over him.]

[Charles looks around, as an air marshal walks up to him. ]

“ For this, ladies and gentlemen is a game… of Murder."

Retrieved from "https://theeverythingeverything.fandom.com/wiki/MURDER/Mystery_Island/Trailers?oldid=21590"
Community content is available under CC-BY-SA unless otherwise noted.